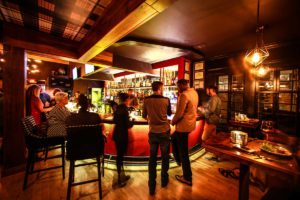 Because Foxtrot recently replaced the ’90s-era Cosmopolitan, it’s natural to wonder if the bar’s British pub trappings—which include clever houndstooth paneling and a plaid ceiling in a clubby space—are just trendy window-dressing for another cheesy Midtown nightclub. But the whiskey-heavy bar menu offers ample evidence that FLB is serious about thoughtful craft cocktails. A great innovation is a list of half-portion cocktails that allows patrons to sample several drinks without needing a stretcher. Expect weekends to bring the vodka-and-soda crowd to the expansive back deck.

Don’t miss The Last Tweet is a nicely herbaceous and refreshing gin tipple
What’s playing A fairly random mix that might follow The Shins with Queen
The scene Subdued on work nights, but a party scene at week’s end